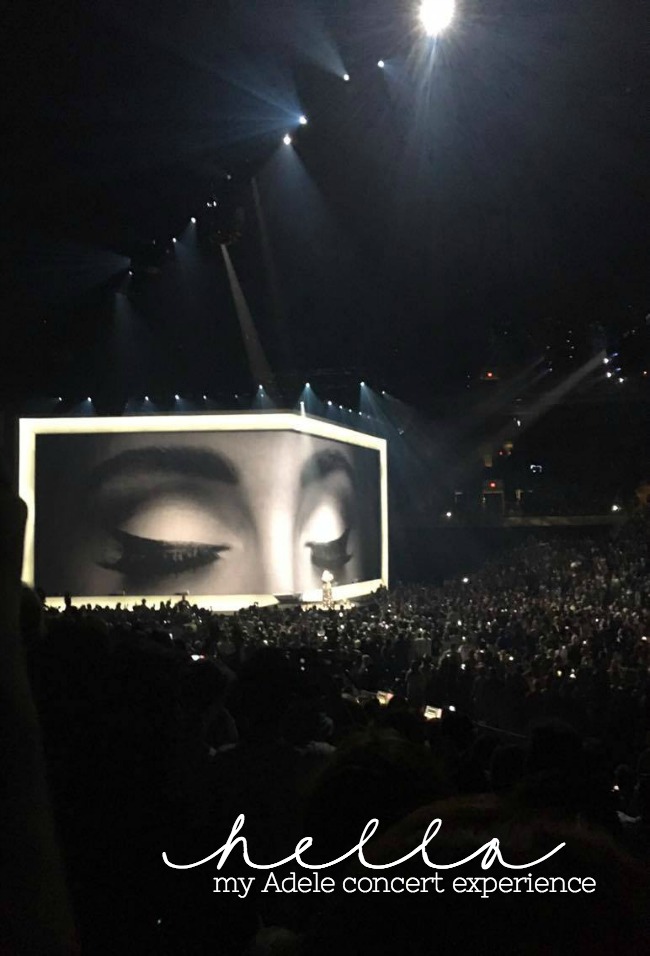 Guys. Tuesday night I had the time of my life! I saw Adele LIVE. I can’t stop thinking about it and it’s somewhat hard to put into words, but I was encouraged by a friend to do so. So here we go. Brace yourselves, because this is probably the longest post I’ll ever write!

Way back in December when Adele’s World Tour tickets were released I just knew I HAD to go. I’m actually not a huge concert go-er but if there was ONE concert I had to go to it was hers. When I announced that I was buying tickets to the concert, for myself, for Christmas – I got no argument from Andre (the hubs). He loves her as much as I do. In fact, HE is the one who introduced me to Adele, way back in the “19” days. So needless to say he was IN. So I set alarms as reminders, plopped myself down next to the wi-fi router with my Macbook, all set and ready to go. I must have clicked refresh a thousand times… 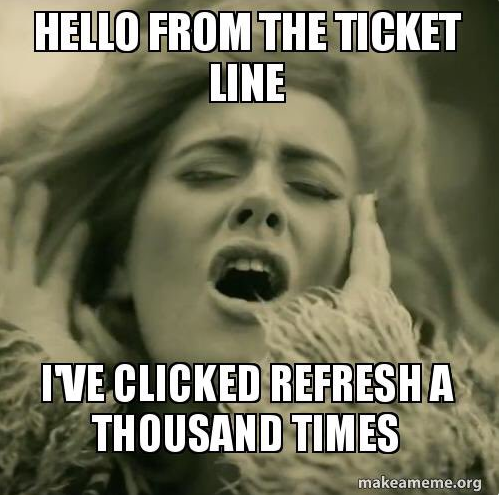 Then the floodgates opened and I GOT THEM. I picked the tickets, made the purchase and went about my day. Then it started trending. Apparently the tickets sold out in seconds and there were thousands left wanting. But we had ours and all there was left was the wait.

This year has just flown by and it was THE DAY. I had been playing 25 on repeat for weeks. My mom came over to stay with the boys so that Andre and I could go off on our date night to see Adele. I was so excited.

We made it there in plenty of time for the show to start; the tickets said 7:30pm but it was well after 8 until it all started. The concert was held at Talking Stick Arena in Phoenix with a two-stage setup, and we sat in row 12 of Section 113. Not bad seats at all! 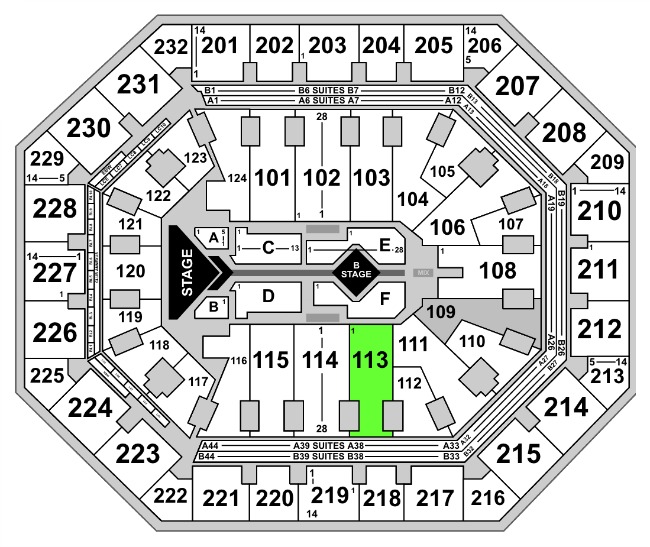 The main stage was to the left of us where there was a large screen of Adele’s eyes closed. 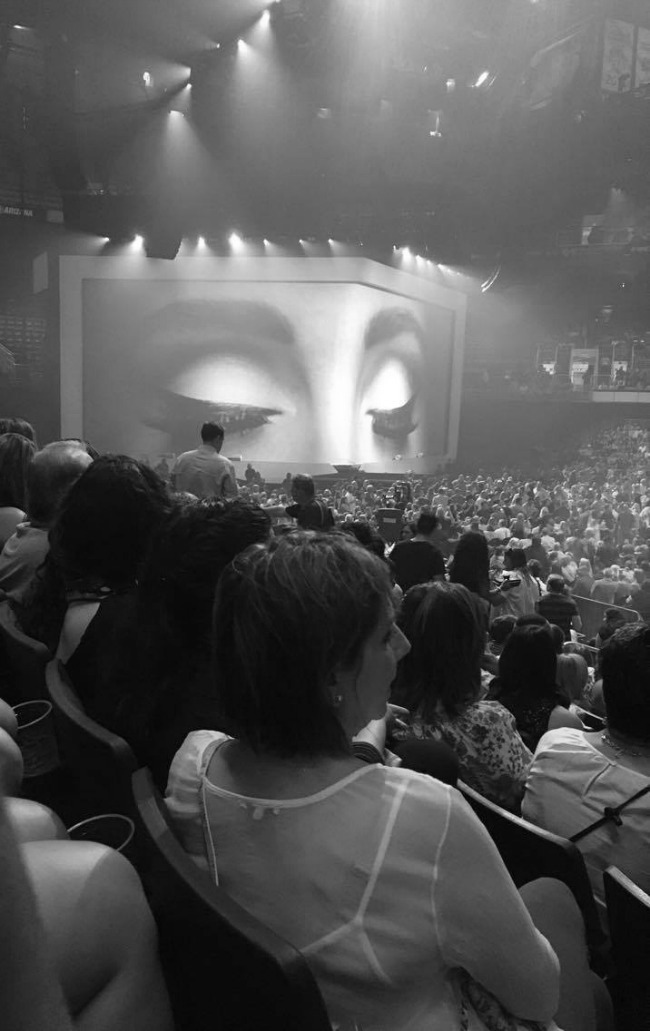 The air was thick with anticipation. And “Stage B” was literally straight ahead from where we were sitting and as I realized there was a chance she’d be there during part of the concert I started freaking out a little. Then the lights went out. HELLO. The eyes on the screen opened and we hear Adele’s voice for the first time. HELLO. The arena erupted in screams. HELLO. In dramatic reveal, a stage lift brought Adele to the top of Stage B. Then we heard it live for the very first time. A song that my boys identify as “it’s your favorite song, Mommy!” was being sung by Adele right in front of my very eyes. I told Andre all year that I was going to ugly cry at the concert, and I was fully expecting it. But I wasn’t ugly crying. I was screaming, smiling from ear to ear and of course, singing along. 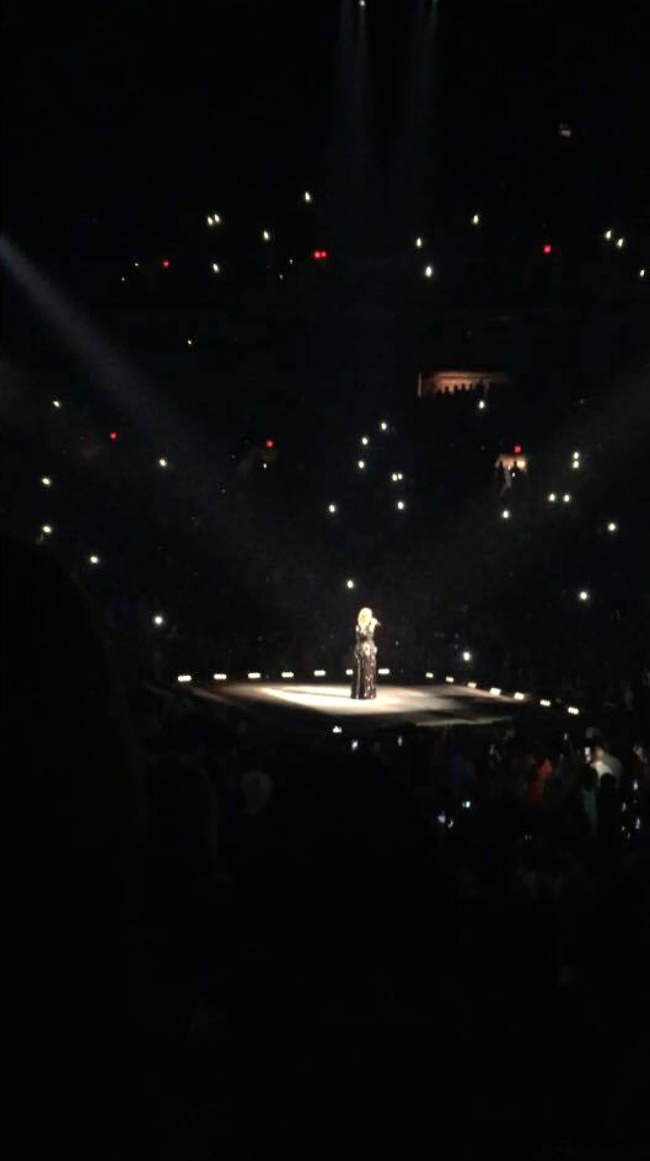 The singing was top notch. You don’t always get that at concerts, not everyone sings as well live as they do on their albums. But oh, Adele does. She killed it. I probably killed it too – her songs – as I tried to belt them out pretending I had anywhere close to her vocal skills. The set was fantastic. Every song that you WANTED her to sing, she did. A wonderful mix of 19, 21 and 25.

But MORE than her singing, we got to see Adele. She was unbelievably charming and charismatic. She brought fans up to the stage for selfies. She sang Happy Birthday to anyone who happened to have a birthday in the arena that night. She apologized to the men that were dragged to the concert (I’m sorry, who wouldn’t want to be there?). She talked about her love of talking…but her rambling made her ever so endearing. She complained about the HEAT in Phoenix. And we all laughed, because yah…we know. “Does it cool off at night? Here in the desert?” she asked. “NO!” We all yelled and laughed some more. She talked about being nervous (Adele gets nervous?), and we learned a little more about her start and how she attributes her success in the U.S. to SNL. She wore a princess crown that one of her fans gave her. She introduced members of her band and shared some back stories, and you could just tell there was such a bond. By the end of the night I was pretty sure that Adele and I were BFF’s. And I’m sure everyone in that arena felt the same way. 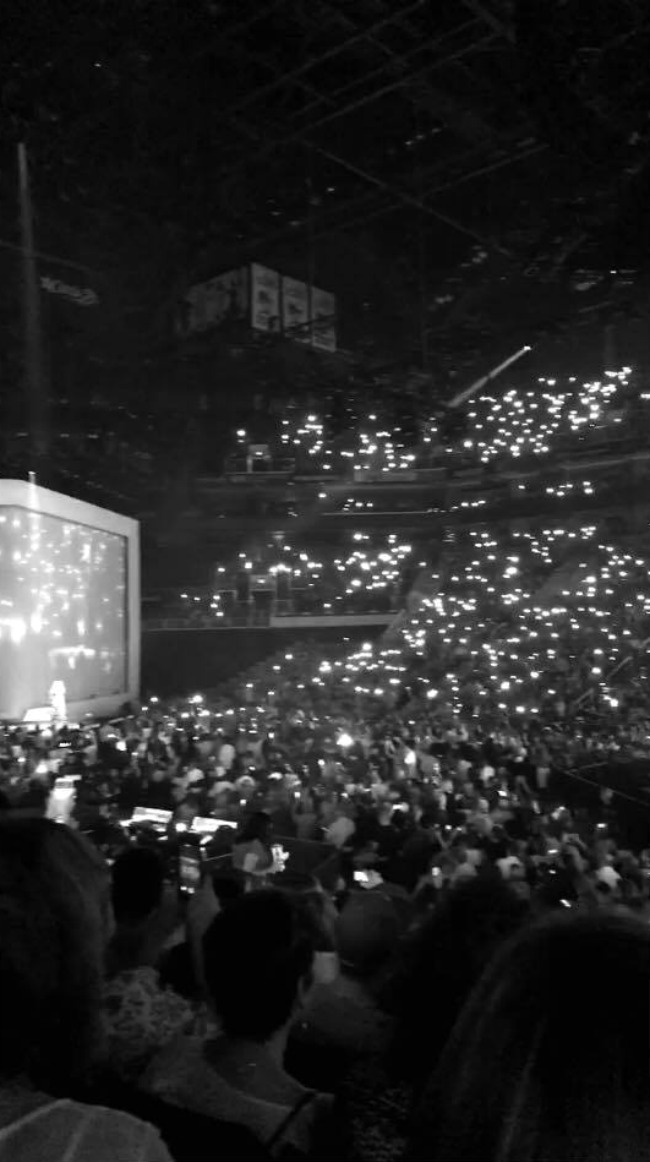 A few of my absolute favorite moments: obviously “Hello” at the outset. The crowd singing “Someone Like You” with their cell phone flashlights shining bright. The effects for “Set Fire to the Rain” were stunning: rain surrounded Adele on stage while red lights darted around the crowd and storm clouds played on the screen on stage. “Send My Love” was a crowd favorite and I also loved the emotional attachment you could feel when she sang “Hometown Glory.” But maybe my most favorite part was being there with my best friend, Andre. I don’t take for granted the things we have in common. There’s no one else in this whole world I’d want to share this experience with. 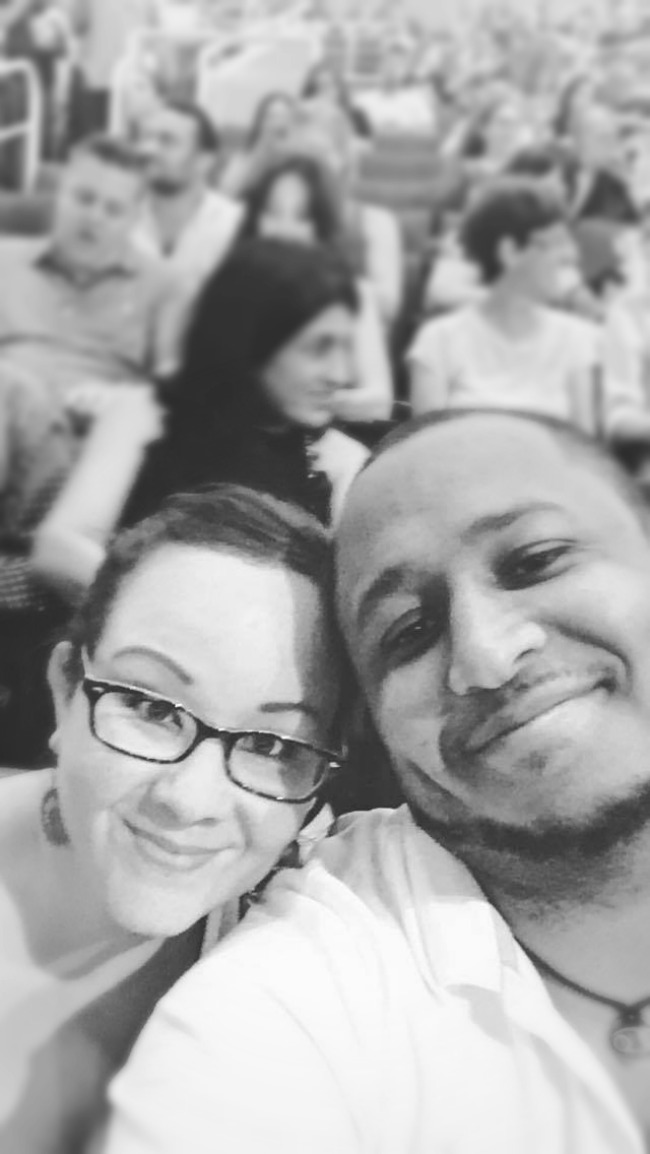 At the end of it all, a million pieces of paper fell from the sky and while at first we thought they were just lovely pieces of confetti, they turned out to be song lyrics and notes from Adele. You could tell the moment that the crowd realized what they were because they started grasping at the papers at and squealing in delight. 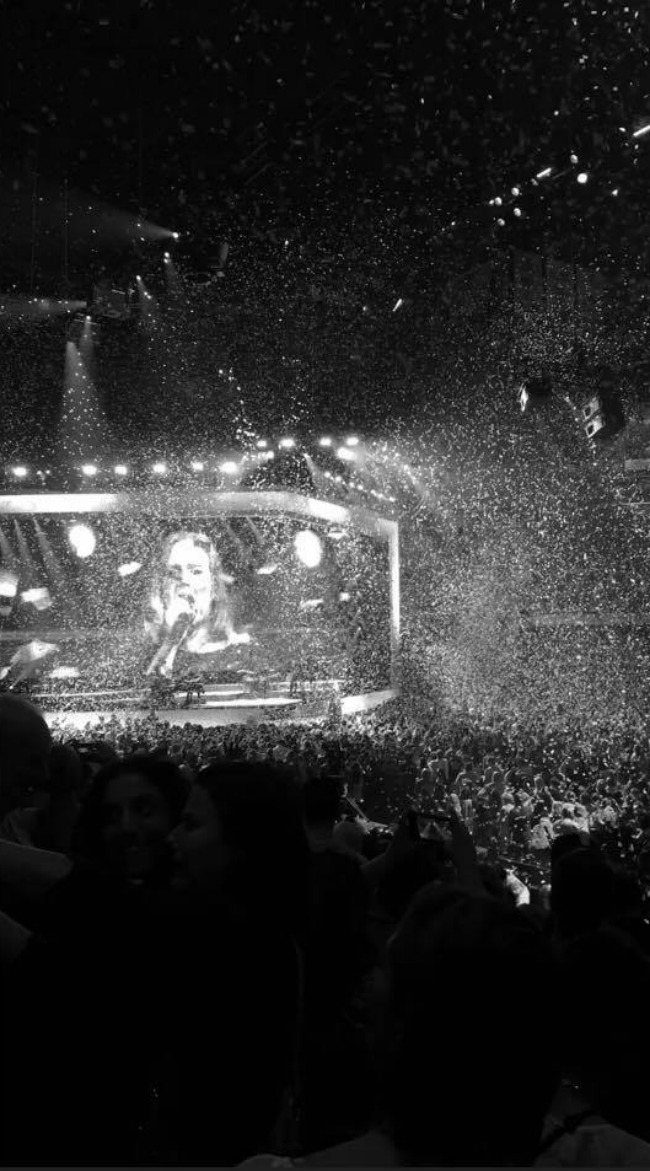 I grabbed a handful, but then saw that someone had found a “hello” and I knew that one of those had to be mine. So I let Andre know we weren’t leaving until we found one. Needless to say he found one almost instantly. A good man, he is. 🙂

I’m pretty sure I hit Andre 100 times over the course of the night because I was just so excited to be there and I couldn’t believe we were ACTUALLY there. It was everything I knew it would be and so much MORE. I knew that I wanted to do something special with our notes from Adele, so I headed down to World Market to find a keepsake jar. Of course I found the perfect one: 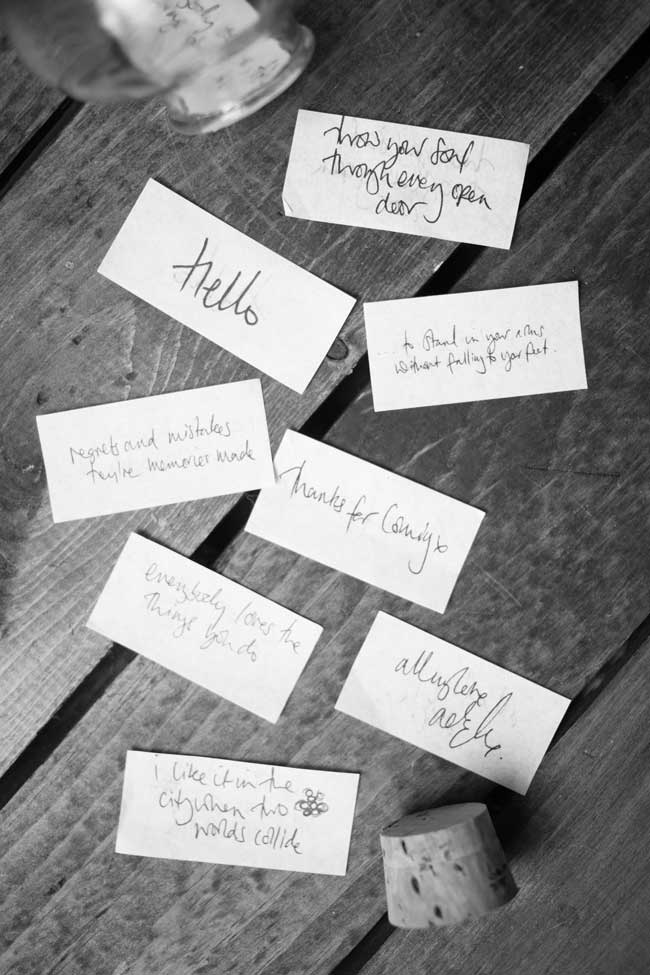 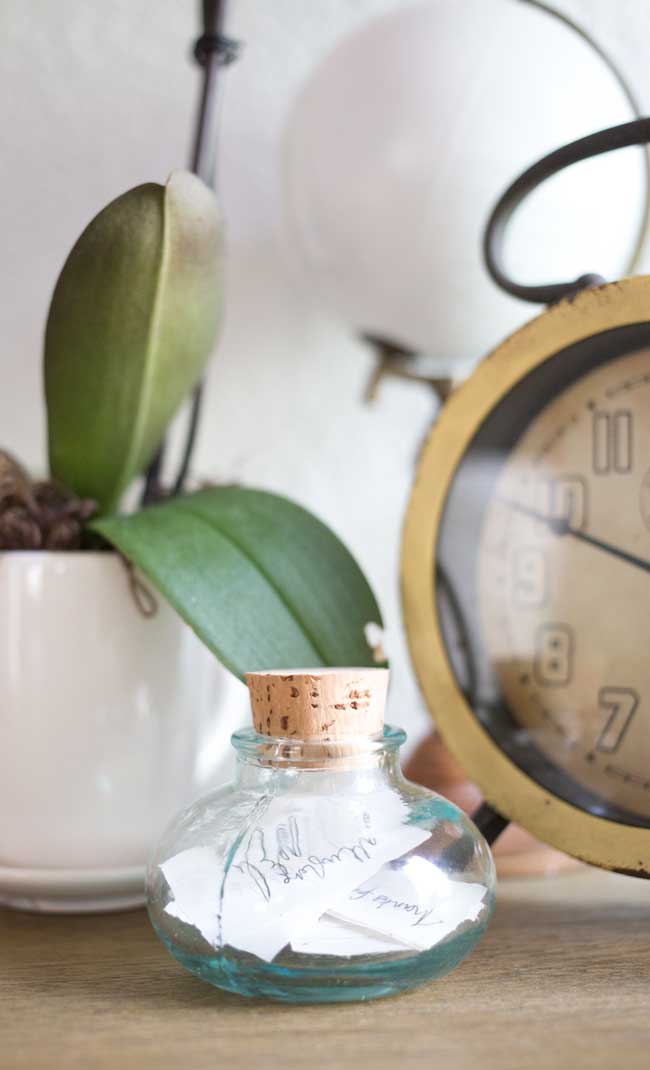 So there you have it friends. An unbelievable experience that I would do all over again in a heartbeat. Wonder why folks spent so much on a concert? Well now I understand. So if you get a chance to see Adele. DO IT. You won’t be disappointed. And if you don’t get a chance this time around, I hope this little post helps to give you a glimpse into one magical night. Thank you, Adele.

ps – when I purchased the tickets I asked my husband if we should go Tuesday or Wednesday night. He said you should always buy opening night. I guess it’s a good thing because Adele got sick after she brought the house down Tuesday night and had to postpone her Wednesday performance to November 21st. But I’m perfectly ok with that…because since my birthday is coming up, I went ahead and bought tickets to that show too. Looking forward to November!

Now I’ll leave you with this…